The transition plan for domain names provides for making the department in charge of the root zone management a subsidiary of ICANN.

A sea of green cards.

When Byron Holland, chair of the ccTLD group [link to definition] took the temperature of the floor on the question “Do you approve the proposals for the transition of the oversight of the IANA function for domain names?” nervousness could be seen on the faces of those who, for three days and 8 hours of intense sessions, had analysed their report, the details of service levels, the developments since the heated discussions in Singapore in March, when everyone thought consensus was unattainable. With perfect timing, the various decision-makers present raised their green cards. Relief!

The Council could therefore approve the report, as had done earlier the Governmental Advisory Committee (GAC), the Security and Stability Advisory Committee, and the Generic Names Supporting Organization (GNSO).

In all likelihood, the ICANN department in charge of the root zone management will become a subsidiary in order to ensure greater transparency on its performance, and especially its costs, to improve the separation between operations and policies. The initial resistance and concerns, whether stimulated or not by political considerations inside ICANN, were defeated thanks to the extraordinary work of a multi-stakeholder working group, helped by a legal advisor independent from ICANN.

Adoption of the report, however, is only a milestone. The pressure now moves to the shoulders of the group which has to improve the accountability of ICANN itself. This is because the proposals on the naming function are conditioned by the adoption of measures capable of controlling the budget of ICANN (and now its subsidiary), to influence the composition of the board, and perform regular reviews of the performance of the IANA function. This Accountability group[1] started its work late and has not yet reached a “consensus”. It must be reached in time for approval at the next ICANN meeting in Dublin in October. 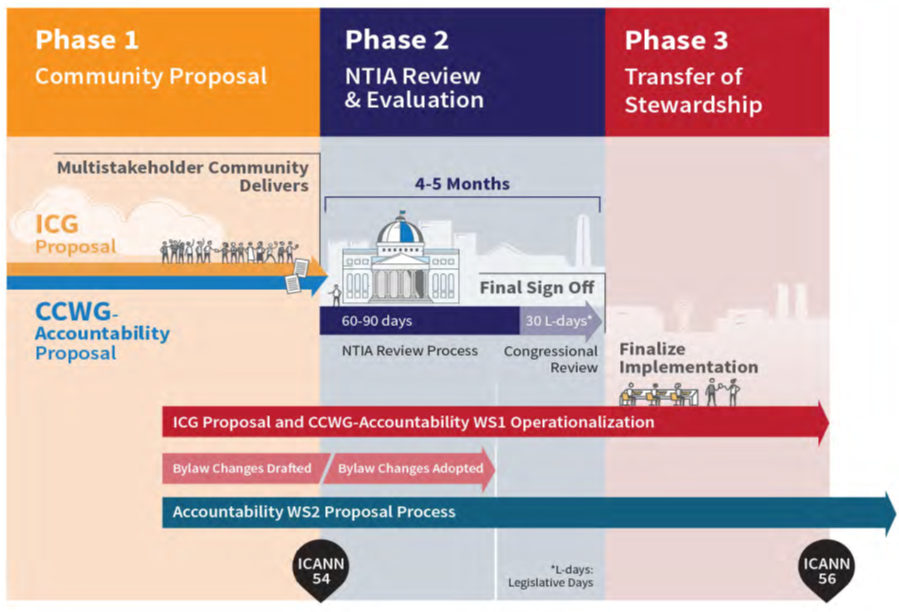 The general schedule for the transition oversight of the IANA function is now much clearer. If the proposals are enacted in Dublin, they will be forwarded to the US Government. The latter must then “certify” that the transition plan meets the criteria it has set for itself, through public consultations that will probably be held in Washington. The plan will then be sent to Congress, again for approval. In all, this verification and approval phase is expected to take 4-5 months, i.e. until February or March 2016. Operational implementation would be the third and final phase, leading to the end of the contract sometime next summer.

This schedule is extremely tight, and various uncertainties still remain, particularly with regard to the ability of Governments to clarify their future role in ICANN, on an equal footing with other stakeholders, but without diminishing their key role on public policy issues. This explosive issue could politicize the debate, in particular in the United States, and paralyze the process. As indicated by one participant in Buenos Aires, given all the efforts made to adopt the proposals on the naming function, if the Accountability group does not conclude on time, its members will be “crucified” by their peers.