Home > Observatory and resources > Expert papers > Should the registrars streamline their gTLD strategy?

Now that ICANN has dismissed the sacrosanct rule of “vertical separation” between registries and registrars, this opens up prospects for registrars to diversify their business in terms of registries, and also offers registries the opportunity to thoroughly review their distribution strategies. As a result, the largest gTLD registries have already obtained permission from ICANN to create their own registrars.

As structuring as they may become, these changes are part of a mid-long term perspective. This includes aspects relating to practices, e.g. how to promote and sell a TLD, as well as channels, e.g. which distribution network is best suited to which TLD. These two key parameters will probably provide a framework for the discussions of the various stakeholders in the years to come.

In the short term, the issue of registrars mainly lies in the fact that their potential offering is about to become a boom market. The pre-registration statistics communicated by some of them are more or less reliable indicators of the future success for the TLDs they are considering offering to their customers. And the main question for registrars – as for registries – is to know for which TLDs they will be accredited and then which ones they will highlight in particular.

The issues associated with gTLD “distribution” practices and networks are thus set to gain increasing significance, and may be vital to some stakeholders. This is why it is useful to draw up a review of the current situation, to find out how gTLD registries have managed their distribution networks up until now, and, on the other hand, how registrars have positioned themselves with respect to the 17 gTLDs that have been on the market since 2011.

The diagram below is a histogram of the number of registrars versus the number of TLDs for which they were accredited in 2011; the situation has only marginally varied since then (1): 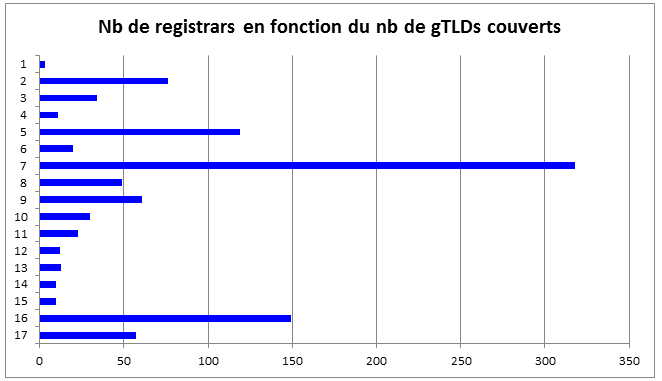 Number of registrars vs. number of gTLDs covered 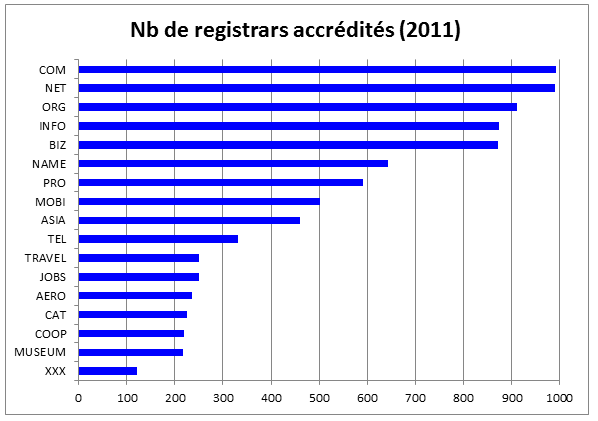 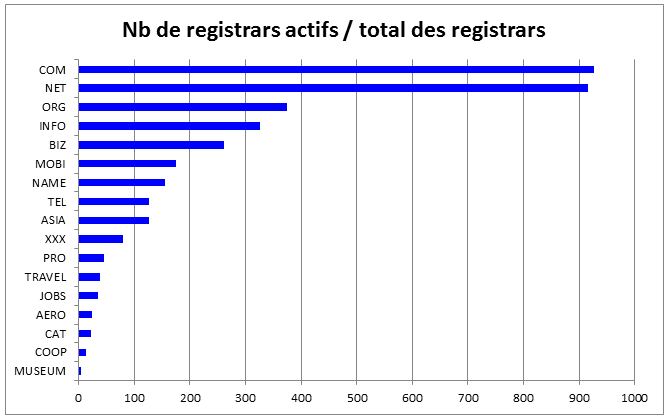 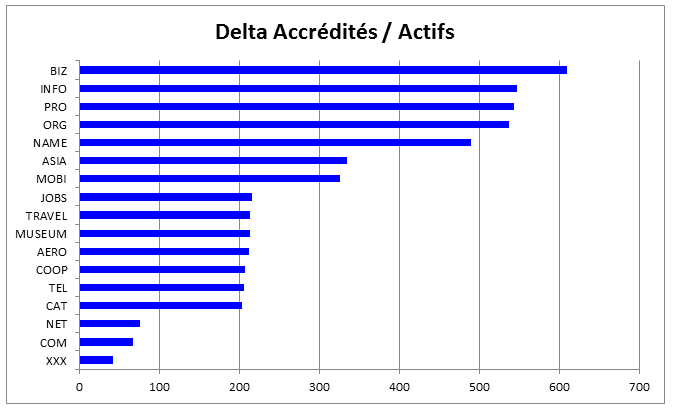 Delta between accredited vs. active registrars.

The offerings shown in the first diagram are therefore rendered theoretical by these findings, proving that TLDs that should in principle be benefiting from a strong “market power”, are in fact only benefiting from a small proportion of it. This could result in significant loss in revenue in the mid-long term.

Are registries and registrars failing to collaborate?

In light of this short analysis, one may ask the (impertinent) question of whether gTLD registries have truly succeeded in incorporating registrars into their development strategies. With the exception of Verisign, whose .com and .net remain successful, other registries seem to be suffering from clear deficiencies in terms of the promotion of TLDs by registrars, despite the fact that these registrars worked to become accredited for the TLDs in question.

So how have things evolved since 2011? No significant changes have been observed: the number of active registrars has slightly decreased (this is reflected in the diagram below by the evolution of .com and .net, both of which have lost 3% of their registrars). However, most TLDs saw an increase in the number of active registrars, with the exception of .aero (-4%) and .coop (0%). Furthermore, one must bear in mind that the performance values in percent are often produced by very low bases for calculation: thus, the +25% change for the .museum TLD is due to the increase in active registrars from 4 to 5 within a year and a half… In reality the situation has only marginally changed since 2011. 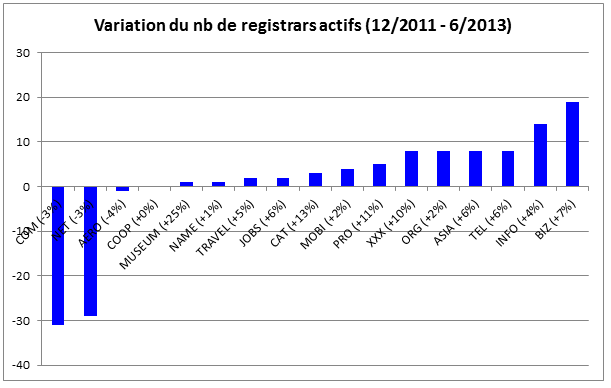 In conclusion, and before taking a look, in a future post, at the strategies that could be developed following the upsurge of new TLDs, one might wonder if there is not a need to streamline the offerings of registrars, since the sustainability of this kind of system is in doubt.

As regards registrars, accreditations obtained in the initial excitement of the TLD launches that are not followed up on after 5 to 10 years should definitely be reconsidered. Logic would dictate going from a quantitative offering in which it was good form to list everything and allow users to make their selection, and adopting a selective offering where registrars will no longer be able to offer every single TLD, and will have to make a choice depending on their own strategies. This could involve a change in domain name marketing practices, from the passive mode (“trawling”, designed to meet abundant demand) to the active mode (“harpooning”, designed to target the most relevant prospect segments for the TLDs offered).

As regards registries, a large proportion of accredited yet inactive registrars represent such a loss in revenue in terms of “market power”, that the pressure subsequent to the overall market slowdown should provide a powerful stimulus for more aggressive strategies towards their network of distributors, both actual and on paper.

It is as if the domain name market, having benefited from enviable success since 1998, had developed haphazardly, and that its players did not really need to optimize their relationships, given the abundance of demand. The ease with which TLDs such as .com, .net, etc. are sold has not incited registrars to position themselves on TLDs less well-known to users, some being considered more “exclusive” than others. As for registries, they appear, for the most part, to have endured this situation without succeeding in making it change in their favor.

The slowdown observed since 2012 has shattered this uncertain situation, forcing registrars to find new products that may compensate for the weakness of their traditional drivers (this is exemplified by GoDaddy’s experience with the .co and .la TLDs). Registries, some of which have even suffered loss of capital stock in 2012-2013, cannot stand idly by, arms at the ready, much longer.

The arrival of new TLDs has muddied the waters by layering over the contextual background: will it set a trend, extending the abundant demand for a few more years that so many players have grown accustomed to? Or will it rather accelerate the need to reshuffle the cards through choices that registries, as well as registrars, will have to make as part of this “New Deal” that everyone will have to comply with?

We will review their options in a future post.