Afnic has published a complete overview of the global domain market in 2016 in a study based on ICANN statistics, information from registries, specialized web sites and its own research.

Since 2014, the market has undergone major upheavals caused by changes linked to the aim of market participants to diversify their sources of income, but also to pursue integration strategies within the value chain.

After boosting the performance of some TLDs in 2015, “Chinese domain name filings” are now weighing on the growth of these same TLDs because of the numerous deletions.

The build-up of the financial sphere in the capital of certain major players is resulting in ambitious strategies while subjecting the market to new frames of reference and changes in management teams.

The intensification of competition and the absolute necessity to optimize the match between supply and demand will continue to weigh on the players and force them to rethink their business models and their positions more than they have ever done since the market first emerged twenty years ago. 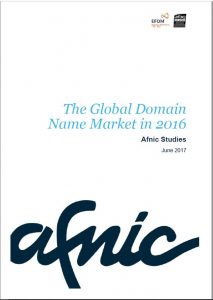