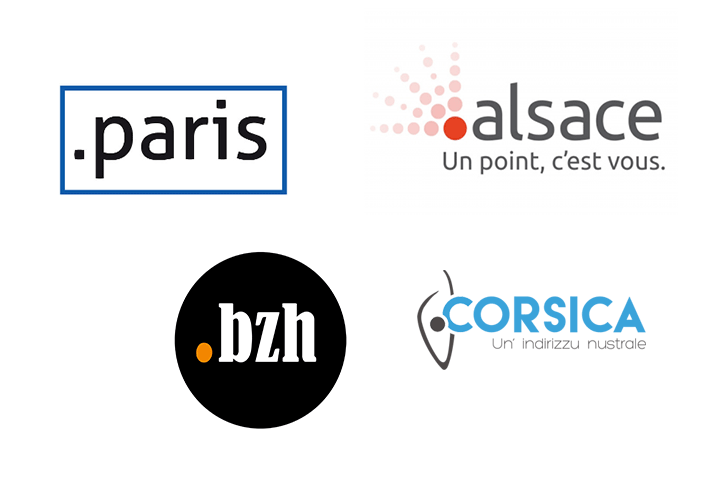 But because they illustrate the economic and cultural vitality of France’s regions and overseas territories, and also express the emotional bonds that connect everyone everywhere with a French city or a region, France now leads Europe in terms of innovation in the domain name market.

France, the second largest player in Europe in the new GeoTLDs

With 4 large-scale projects to its credit (.paris, .bzh, .alsace and .corsica), France is, with Germany and the United Kingdom, a world leader in these new namespaces. One feature specific to French GeoTLDs that makes them even more interesting is that, unlike their counterparts in Germany or the United Kingdom (.wales, .ruhr, etc.), they are not part of a federal organization. On the contrary they result from a political will to assert each location’s individuality in relation to the international competition they must now confront, such that entrepreneurs, associations and companies within them are already seizing the opportunity to express their attachment to the locations in question and reap the economic benefits of their respective reputations.

“As a technical registry operator, Afnic has built its offer around two key ideas: keeping close to French market players and supporting them in every way so that they can play a leading role. The success of the French GeoTLDs is a perfect illustration of that approach.” Mathieu Weill, Afnic CEO

GeoTLDs with a “French Flair”

While the debate around .vin and .wine and other such nTLDs has been raging for over a year, the success of French GeoTLDs can be seen as an expression by the French of their attachment to the geographical origin of products and services. They highlight the holders’ connections with a location, territory or region, allowing them to use that origin as a positive, reassuring feature of their products and services.

Holders such as the Eiffel Tower (toureiffel.paris), singer Yann Tiersen (yanntiersen.bzh), the Pietra brewery (brasseriepietra.corsica) or the innovative secure e-mail and confidentiality protection service @email.alsace (www.email.alsace) illustrate the diversity of the players using the new TLDs. Because it is the uses that will allow the addresses to gradually gain ground. Far from the volumes announced by some of the new TLDs whose effective use remains to be proven, the French GeoTLDs with their communities are building a new French digital space, rich in its economic, cultural and linguistic diversity.

“Brittany today, with 43,000 jobs, is the second largest digital economy in France. The Minitel, mp3 and ADSL were all launched in the region. Ranked among the most qualitative new TLDs, the .BZH is furthering that tradition of digital excellence and is a superb means of communication for spreading the reputation of Brittany, its social and economic players and culture on the world-wide web. Benchmark players such as the Regional Council of Brittany, the “Made in Brittany” corporate network, the Inter-Celtic Festival of Lorient or the Stade Brestois 29 Football Club naturally communicate with the .BZH regional TLD. Adopted by players of every size and in every market sector, the .BZH is gradually becoming the common digital feature of a dynamic Brittany open onto the world.” David Lesvenan, President of the www.bzh Association

“The dot Corsica GeoTLD symbolizes our attachment to Corsica’s economic, social and cultural values in digital terms. The Corsican Territorial Authority has developed an ambitious program to fully support the development of Corsica’s digital identity thanks to the commitment of its ‘Imbasciatori’, the pioneers of the new TLD:” Eric Ferrari, Head of the Technology Development Department of the Corsican Territorial Authority that oversees the .corsica GeoTLD.

“We are building the digital future for the region of Alsace, and for the companies and public sector players within it. We place great value on developing uses and supporting innovative projects, but also on showcasing the heritage, culture, history and traditions that have shaped Alsace. The .alsace GeoTLD is based on foundations of strong values.” Benjamin Louis, .alsace project manager