Internet governance: let’s get to work! 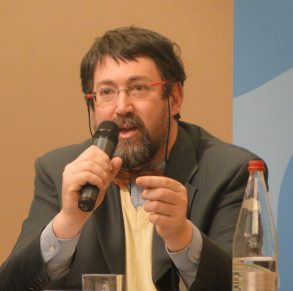 Honorary Chair appointed to represent ISOC France, elected by the User members to the Afnic Board of Trustees

Sébastien Bachollet, Member of the ICANN Excutive Board, goes over the 8th meeting of the Internet Governance Forum (IGF), that took place in Bali:

At the 8th meeting of the Internet Governance Forum (IGF), which just ended in Bali (Indonesia), a number of meetings, both on and off the agenda, focused on the roles of the various parties involved in Internet governance by multiple stakeholders.

Three major events added spice to the forum, given its purpose is to deal with the development of Internet governance:

The first of the above events poses a more acute but fundamental question about the place of the U.S. government in the manner in which the Internet is managed and governed. It also makes the search for one (or more) alternatives [1] a more urgent issue.

The 10 organizations (or the I* organizations, namely the 5 Regional Internet registries (RIR) – AFRINIC, ARIN, APNIC, LACNIC, RIPE NCC – as  well as the Internet Architecture Board, ICANN, IETF, Internet Society Worldwide and W3C) which manage on a day-to-day basis the technical issues involved in the operation of the Internet, issued a joint statement during the meeting of their leaders in Montevideo [2] in early October. In one of the points raised, “They identified the need for ongoing effort to address Internet Governance challenges, and agreed to catalyze community-wide efforts towards the evolution of global multi-stakeholder Internet cooperation.” »

The President of Brazil appealed to the General Assembly of the United Nations to set up a multilateral solution (i.e. only at the level of governments and/or their international intergovernmental organizations).

Further to the Montevideo Statement, the ICANN CEO Fadi Chehadé had a meeting with President Dilma Rousseff in Brasilia, which resulted in a Brazilian proposal to hold a “summit” to take stock of the all the issues affecting the governance of the Internet with representatives of all the stakeholders from as many countries of the world as possible, early in May 2014 [3].

The objective of this “summit” is not to find solutions to each of the problems affecting the Internet, but to set up an open, multi-stakeholder framework allowing each of them to seek solutions. In other words, to develop a new model for Internet governance.

The role of the U.S. in Internet governance, the Montevideo Statement and the draft Summit in Brazil were therefore the center of many discussions in Bali.

During the IGF in Bali, the I* group organized various information and exchange meetings which were extended to include other Internet stakeholders. Participants from the private sector, civil society, government bodies and ccTLDs (including Afnic, which I represented in these discussions) were able to interact with I* leaders.

The aim is to set up a “coalition” of the main leaders and stakeholders in the Internet to find answers, so that genuinely multi-stakeholder solutions to each and all of the issues involved in the governance of the Internet can be implemented. The “coalition” will also be used to prepare for the meeting in Brazil, which should be co-hosted by several countries, launch an information campaign, as well as engage and encourage the participation all the stakeholders all around the world…

During these meetings, various speakers emphasized the following points that I have attempted to summarize as follows.

Since the WCIT [4] and the events in recent weeks, the “coalition of the willing”, whose stated goal was to protect the multi-stakeholder model of Internet governance, with the U.S. government as a major player, has been weakened and has no alternative to offer.

So much so that today there is a real risk that Internet governance could fall under the (sole) control of intergovernmental organizations, leaving no room for civil society or the private sector.

Various topics related to Internet governance have no framework with which they can be dealt, at least no framework accepted by one and all. A number of these issues were addressed, such as spam, the defense of children and young people against online pornography, the use of collected data, to name but a few.

It is time to work on an alternative, both to the current form of multi-stakeholder governance that gives too much weight to a single state (the U.S.) and a purely UN solution which would exclude the non-governmental stakeholders who form the foundations for the operation of the Internet.

The next 18 to 24 months will be crucial for the defense of a truly multi-stakeholder model, and end the battle for influence currently being waged by and between States on the control of critical Internet resources.

So far, the I* organizations have set up meetings of their leaders to discuss the hot topics of the day and then the actions that might be undertaken by each member organization. It is high time that this circle be enlarged so that we can collectively and publicly take action in favor of open Internet based on a multi-stakeholder, distributed framework.

Finding one such framework that is acceptable and accepted by the greatest number, so that solutions can be found to the problems facing the Internet today, should be the goal of the meeting to be held in Brazil. The discussions should address the issues involved in the institutionalization of framework(s) that operate effectively and efficiently, as well as the decision-making process (from voting to consensus)…

The proposed solutions (blueprints) must be made before March 1, 2014. An independent high-level committee may be set up by the “coalition” to prepare a draft and/or review all of the proposals.

Many of these topics are being discussed as part of the creation of that “coalition”, and will be central to the meeting in Brazil.

The French internet community will have its say, and Afnic, from my point of view, will have an important role in the organization of French debates on the development of the global governance of the Internet. A French forum on Internet governance is about to be set up, which will also address these issues.

In Bali, I could see that the positions of the various stakeholders involved in Internet Governance had quickly moved, after a period of virtual “cold war” dating back to the last World Summit on the Information Society at the United Nations. The combination of current events and the international calendar (ITU Plenipotentiary Conference, UN discussions on the organization of a new World Summit, etc.) mean there is an urgent need for in-depth analysis and consensus as wide as possible about how to set up a new form of Internet governance, that is inclusive and open to all of the stakeholders involved. If we fail to achieve that consensus, we shall be giving in to sterile confrontations between states, control by private lobbies, and bureaucratic calculations of international organizations. If we do not immediately and firmly commit to undertake discussions on the future of the Internet, we shall be letting others decide for us. French users and Internet stakeholders deserve better. Let’s get to work!

[1] We do not address here the issue of the role of the U.S. Department of Commerce in the management of the Internet root, which deserves an article by itself.

[4] The WCIT, organized by the International Telecommunication Union (ITU), was supposed adopt the international telecommunications treaty, and resulted in a clash between a coalition of countries led by the U.S., on the one hand, and most of the emerging and developing countries on the other. See in this respect Afnic’s position at the time: https://www.afnic.fr/en/observatory-and-resources/news/afnic-calls-for-a-clarification-of-the-role-of-the-itu-on-the-internet/