The recent transfer of the PIR’s .org registry from the ISOC to the Ethos Capital fund has already attracted a great deal of press coverage. Our aim here is not to dwell on this somewhat unethical move, announced only after the ICANN gave the green light to remove any ‘caps’ on future increases in .org tariffs, but primarily to offer an overview of the .org domain as revealed by the ICANN Transaction Reports published since 2010. These data might shed light on the choices made by the ISOC and Ethos Capital.

A TLD at risk of decline

If we look at the .org stock, i.e. the number of names at the end of the year, we can see that after having grown continuously between 2009 (and even earlier) and 2016, this major TLD has been experiencing a net loss since 2017. If the current trend continues, we should even see it drop below 10 million names in 2020. 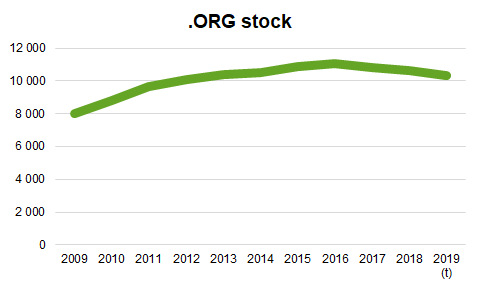 The slowdown, however, dates much further back than 2017, with the growth of the TLD following a downward trend since at least 2010 and becoming distinctly negative in 2017. The situation is not ideal, but it is certainly better than those of other major legacy TLDs such as.biz and .info, which have lost much more ground. 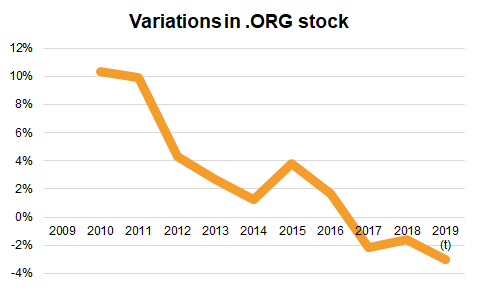 The ‘flow’ view of creations and deletions makes it easier to understand the evolution of stock levels. Deletions are not directly provided by the ICANN’s Transaction Reports; we recalculate them by applying the following very simple formulas, where (N) refers to the year studied:

What does this show us? 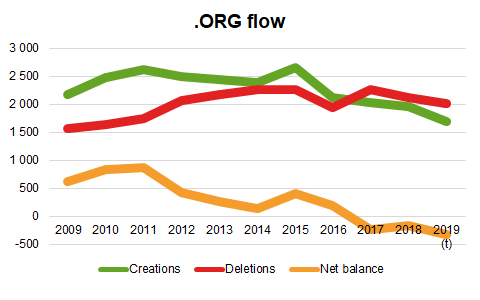 The creation of .org domain names plateaued at around 2.5 million per year between 2011 and 2016. 2016 was particularly poor, with new creations dropping to 2 million – a trend that has continued to this day following a long-term trend that began in 2012.

Deletions, meanwhile, have tended to follow the same pattern but with something of a delay, with the 2015 peak in creations (linked perhaps to the first wave of Chinese domaining in October-November) subsequently reflected in 2017 when they resulted in a bottleneck situation between the downward trend in creations and the return of deletions to their 2014/2015 levels. Whilst the number of deletions then continued to follow the pattern set by creations, it was the weakness of the latter and their inability to restore the balance that caused the deficit that we have seen in 2018 and 2019.

A quick look at the KPIs

The rate at which .org domain names are created is measured by the following formula:

This makes it possible to gauge the commercial dynamic, i.e. what proportion of the names in stock at the end of the period were created during the year.

The maintenance rate, meanwhile, is subject to sudden variations relating to the events of 2015/2016: 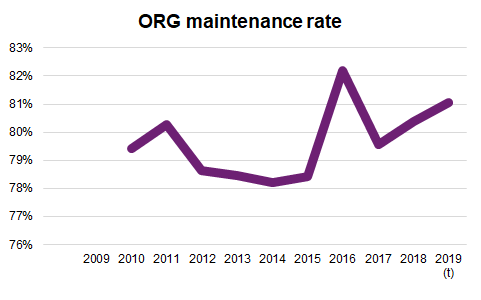 That said, it does seem to be on the rise overall and is likely to stabilise at around 81-82% in the coming years.

From a dynamic and rapidly expanding TLD, .org has started to show signs of maturity – a low creation rate and a high maintenance rate – in the space of just a few years. The PIR seemingly found it impossible to sustain the level of creation faced with the emergence of new TLDs.

It is easier to see why it was important for the ISOC to break free of the restrictions of capping tariffs in order to ‘properly sell’ the .org domain. This dynamic of decline cannot be reversed in a few months, and even mass marketing and promotional campaigns, if they do achieve good results in terms of new creations and stock in the short term, will not necessarily translate into long-term profit. With this in mind, it was important for Ethos Capital to ensure that it could raise tariffs in order to compensate at least for the expected loss of stock over the next two years before its recovery strategy could bear lasting fruit. The increase will also be used to fund promotional campaigns, which often result in rebates for registrars to a greater or lesser extent.

The mechanism is, of course, more subtle, since it has to be possible to take price elasticity and the paradox derived from a TLD that is presented as serving the community sphere despite the fact that it is owned by an investment fund into account in the calculation.

.org continues to provide an enviable source of income with its 10 million names and ability to fund various other operations. Ethos Capital has thus, in the space of a few days, become a player in the domain name market that we will undoubtedly have to take into account in the future since it doesn’t appear to have satisfied its hunger just yet…

.FR domain names have reaffirmed their success with a 3.7% increase in one year

Launched a year ago, the new TLDs for use in France (.paris, .bzh, etc.) are now part of the country...