The Annual General Meeting of Afnic, the registry for the .fr TLD, was held on June 7. The terms of office of the five elected members of its board of directors were renewed. In addition, Emmanuel Sartorius, a new representative for the French National Institute for Research in Computer Science and Control (INRIA) replaced Jean-Pierre Dardayrol.

The Board of Directors is the main decision-taking body of Afnic, and has extensive powers to take any initiatives not reserved for the General Assembly of Members. It consists of five representatives nominated by the founding members and five elected representatives, their terms of office being renewed every three years.

The following were elected at the General Meeting of June 7:

– Sébastien Bachollet in his individual capacity

– Lala Andriamampianina of the NIC Madagascar

Moreover, the current Chairman of Afnic, Jean-Pierre Dardayrol chose not to seek a second term. The Chairman of the French National Institute for Research in Computer Science and Control (INRIA) appointed Emmanuel Sartorius as his successor in the role of INRIA representative.

Emmanuel Sartorius, elected President by the Afnic Board, said, “Under the leadership of Jean-Pierre Dardayrol, Afnic had adopted professional governance system, and its role as the registry for the .fr TLD was renewed.  I am extremely pleased to be able to pursue those initiatives, and serve the interests of all the stakeholders of the Internet in France.” 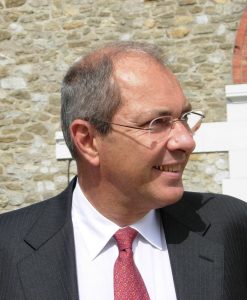 After studying from the Ecole Polytechnique and the Ecole Nationale Supérieure des Télécommunications, Emmanuel Sartorius graduated with the Mining engineer grade.

He began his career in international and satellite communications to the Directorate General for Telecommunications, and from 1981 to 1986 was Governor of INTELSAT for France and Monaco, representing France on the Board of INMARSAT, and chairing the EUTELSAT Board of signatories. He was then appointed director of the National Commission for Communication and Liberties and the Superior Audiovisual Council in 1987, before returning to the France Telecom Group in 1989 as Director of Development and Director of International Services for France Cables & Radio.

In 1991 he joined AEROSPATIALE as Director of the Satellites Division in the Space and Defense branch, then as Director of the Systems and Services Operations Center in the Aerospace branch. In 1998 he moved to Dassault Aviation as Director of the International Division in charge of military marketing in Europe. In 2002, he joined the administration of the General Council of Information Technology, where he focused in particular on security and defense issues, before being named Senior Defense Official for the Ministry of Economy, Finance and Industry in April 2006, then as Senior Defense and Security Official for the Ministry of the Economy, Industry and Employment and the Ministry of the Budget, Public Accounts and Civil Service in May 2007. In 2010, he joined the General Council for Economy, Industry, Technology and Energy. Recent activities include chairing a working group of the Centre for Strategic Analysis on the future of the European Space Policy (2011) and authoring several reports, including one on French engineering companies and technology consulting (2011), and another on the status of the PSA-Peugeot-Citroën group for the Minister of Industrial Recovery (2012).