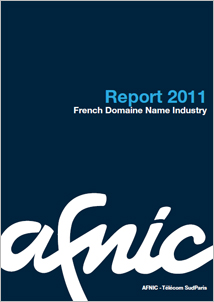 Factors and trends in this new edition

Growth of the .fr TLD well above the average rate for extensions

The new edition of the Industry Report shows that the .fr TLD retains a high absolute level of growth, of around 17% over one year, i.e. five points higher than the average for national extensions. The extension is adding domains at a rate of 300,000 new names a year, now representing more than 2.1 million names, or nearly one third of all the domain names registered in France.

A dynamic portfolio of .fr domain names, in line with current events

The 2011 edition of the French Domain Name Industry Report shows that the “portfolio” of names with the .fr extension is fully in line with current events: for example, “France” and “Paris” are the leading character strings forming .fr domain names, followed by terms related to the world of insurance and, logically, to 2011 and 2012. As far as the corporate sector is concerned, 94 of the top 100 companies in France and nearly 80% of the 1,000 largest companies registered their .fr domain name in 2011

The Report shows that in 2011, 39.5% of the holders of .fr domain names were individuals, and 60.5% were corporate entities. The renewal rate of the .fr extension is around 80%, a figure which is high compared with other extensions around the world.

The study of the location of domain names in France still reports a significant concentration in departments with the greatest population density, for individuals and businesses alike. It also shows a strong correlation between the number of .fr domain names registered in French regions and the regional gross domestic product.

Concerning the section on Registrars, the 2011 Report shows that 16% of the registrars of .fr domain names are now located abroad against 14.5% last year.

Finally, the Report shows that the median price of a domain name proposed for end users is estimated at 12 euros plus VAT, and has remained stable in relation to previous years.

The new edition of the Report shows that the share of .fr domain names that are IPv6-enabled has evolved considerably since last year: nearly 40% of .fr domain names now support IPv6 for DNS and more than 8% for mail servers, but only 2 % for web servers.

Finally, the percentage of requests received by the authoritative servers for IPv6 in the French namespace is also slightly up, standing at 1.5% this year.

This new edition of the Report discusses the changes that will impact the market for domain names, including: