Overall market growth was 1.2% in 2017, down from 7.1% in 2016. This figure can be qualified by the deletions that followed the high volume of create operations that occurred in March and June 2016. A “return to normal” is expected in 2018 with an attenuation of the impact of the atypical phenomena of 2015 – 2017 related to Chinese domainers.

NTLDs came to an abrupt halt in 2018, and saw their market share decrease (-1 point) and their volume decline by 15%, which represents 4 million domain names.

The consolidation of the market share of “leading” namespaces, both globally and in France, combined with fairly severe losses for “Legacy” TLDs other than the .COM, suggest that some arbitrage operations were taking place between between nTLDs and Other Legacy TLDs, but these mostly concerned defensive names.

Regional ccTLD dynamics show Africa is achieving impressive growth (72.7%), while other regions are stagnating or slightly declining. These data can be qualified by the massive volumes of domain name registrations under the “penny ccTLDs” which do not necessarily target the long term.

The development of the nTLD utilization rate (25%) as a whole continues to be encouraging, although its level remains low and the proportion of names “really used” increased little in 2017 despite the “purges” that impacted the main TLD suffixes .

The study of the distribution of domain names at the global level clearly shows a  predominance of North America for “Legacy” TLDs with nearly 58% of the .COM names, Europe for ccTLDs (49%), and Asia-Pacific for nTLDs (51%).

The domain name market in 2017 was also marked by a phenomenon of change and recomposition. The concentration of players continued at all levels while the financial situation remained tense. One may note that financial reasoning tends to be increasingly present (to the detriment of any entrepreneurial approach) due to the presence of strictly financial investors in the capital of major stakeholders (whether listed on the stock market or not) and the sluggish economic performance of many nTLDs that can create tight cash positions. Faced with these uncertainties, the players are looking for new opportunities, particularly in China, while striving to optimize their sales processes.

Given the uncertainty of this situation, the registry – registrar system will no doubt have to change in the future, by increasingly favoring the emergence of specialized or “proximity” resellers, who will take care of marketing nTLDs to the niche markets concerned. The transformation is not an easy one for all of the stakeholders and remains slow in gaining wider acceptance.

Finally, at the registry level, the main areas of development and diversification identified in 2017 were security, DNS infrastructures, the fight against fraudulent or abusive use, the exploitation of data and the Internet of Things. 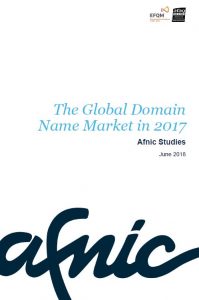