Analysis of the .RE

Home > Observatory and resources > Expert papers > Analysis of the .RE

The .RE is the Top Level Domain for Réunion. It was created on 7 April 1997 and successively managed by the NIC France reporting to the Inria, then by Afnic when it started its activities on 1 January 1998.

Our focus in this document will be on presenting the current trends in the .RE, going back several years to gain perspective.

Data marked as ‘2020’ is that available at the start of September 2020 or that has been extrapolated up to the end of 2020. This data can therefore not be considered definitive.

Number of .RE domain names

The .RE has 31,000 names to date. It experienced a noticeable spike in 2016 due to the impact of the ‘domaining’ wave that year that also concerned many other TLDs. Like most TLDs affected by this phenomenon, the majority of these speculative names were deleted the following year, which led to a drop in stock in 2017 and a return to the underlying trend observed since 2013. 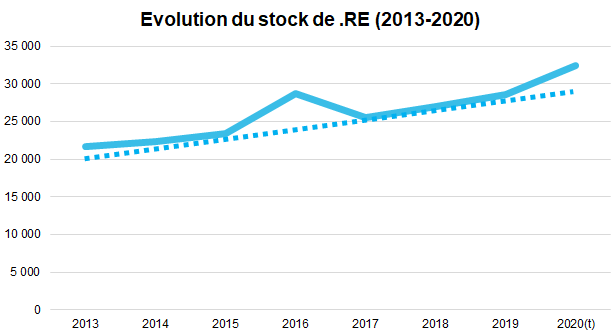 In 2020, the .RE seems to have been positively impacted by lockdown, like many other TLDs.

Change in annual growth of the number of .RE names

Change in create and delete operations for the .RE

Create operations for the .RE exhibited a downward trend in 2014-2017 (with the exception of 2016 which was an ‘anomalous’ year). 2018-2019 was very stable with annual create operations at a rate of around 6,000. 2020 is naturally an exceptional case: the create differential due to lockdown and the acceleration of the digital transition can be estimated, all other things being equal, at around 3,000 (+50%), which is consistent with the figure recorded for stock. We can deduce that in 2020, delete operations have remained highly stable, which is also reflected in the graph below. 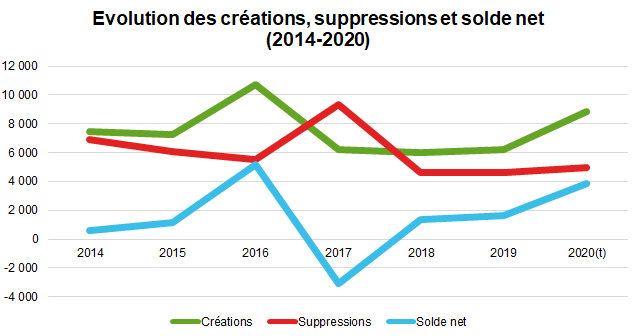 Will we see a similar purge in 2021 for names registered in 2020? Not necessarily, as the names registered during lockdown and after appear less purely ‘speculative’ than those in 2016. However, the economic situation could lead to bankruptcies and arbitration which would inevitably result in deletions.

Formation of the net balance of the .RE

The graph below shows that the variations in renewals are very stable: every year, 1,500 to 2,000 additional new names are renewed compared to the previous year. 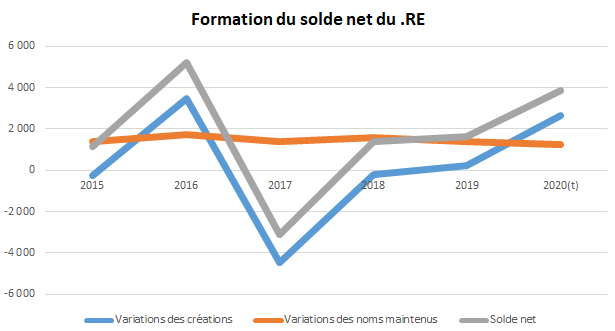 The variations in the net balance, in contrast, appear to have a strong correlation with those of create operations. The .RE therefore has a fairly ‘young’ profile as a TLD, and its stock is not yet sizeable enough to dampen the volatility of create operations. This phenomenon should ease over the long term, but is still very poignant currently. The key indicators of the .RE activity closely reflect this context.

Change in key indicators of the activity of the .RE

The key activity indicators for a TLD are:

The creation rate is on a downward trend, falling from 34% in 2014 to 22% in 2019. There is a very close correlation between this change and the change in create operations against a backdrop of moderate growth. This can be explained by a penetration rate that has reached a threshold where creations are less due to a ‘catch-up’ phenomenon than to the emergence of new needs. The momentum of the .RE, however, remains strong, given that the creation rate for the .FR, for example, is around 19-20%. In 2020, the creation rate has shot up for the reasons already mentioned, but it is unlikely that this phenomenon is anything other than temporary. 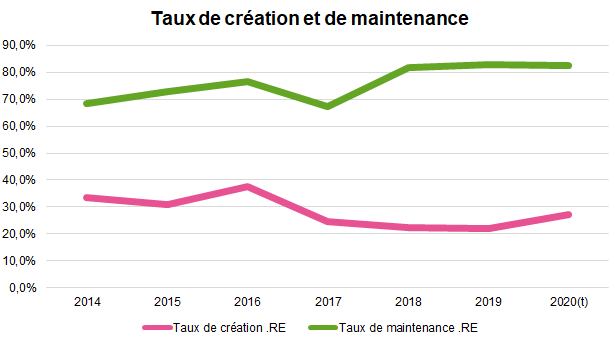 The renewal rate has risen from 70% to 82-83% in five years. This phenomenon reflects the appropriation of .RE domain names by their holders and the gradual transformation of an extremely volatile TLD (high creation rate, moderation retention rate) into a more solid one, rooted in uses and also containing a certain number of defensive registrations.

Holders of .RE names voluntarily indicate if they are private individuals (in which case their data is anonymised by default in the Whois base) or corporations.

The breakdown presented below should therefore be viewed with caution, insofar as it is based solely on declarations. We know from experience that some ‘Private Individual’ holders are in fact owners of VSE/SMEs and tradespersons who use their domain names for professional purposes. However, the number of .RE domain names concerned is currently impossible to evaluate with any degree of precision. 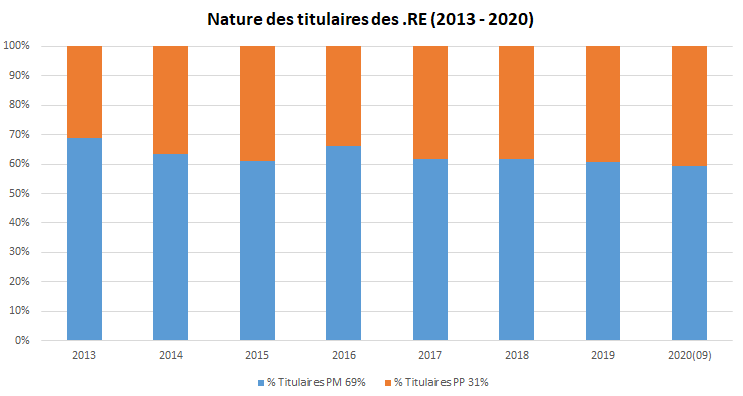 The increase in Private Individuals (except in 2016, an anomalous year) illustrates the fact that uses of the .RE are changing and that an ever growing audience is taking up the TLD, even though this phenomenon remains relatively slow.

Change in geographical distribution of holders of the .RE

The study of the geographic distribution of .RE holders shows that the share of names registered by holders from Réunion declined between 2013 and 2016, before stabilising at 55-60%. Except for 2016 (noticeable impact of the domaining operation), we see that the ‘lines’ remain essentially unchanged since 2015, with 16-18% of .RE registered by holders in France (and French overseas territories) and 25-30% by holders in the European Union outside of France. The remainder are held by holders outside of the European Union. These may be eligible holders (names registered before 2011) or non-eligible holders who risk losing their .RE.

Change in percentage of DNSSEC-signed .RE

The DNSSEC protocol is designed to protect domain names from certain forms of attack whose feasibility was proven in 2008. The community of DNS experts and notably registries took action after this date to encourage holders and registrars to sign domain names with DNSSEC for their protection.

However, take-up has been very slow, and more marked for the .RE (15% in September 2020) than .FR (12% in September 2020). It has gone through several periods, with a staggered development phase (2013-2018) as a result of the policies of major registrars which have decided to sign the names under their management with DNSSEC by default. But the change between 2019 and 2020 is more worrying, as it marks a decline: registrars using DNSSEC signing are perhaps less active, and their market share is diluted by competitors that do not sign with DNSSEC.

Percentage of .RE domain names signed with DNSSEC

Change in percentage of .RE with IDNs

‘IDN’ characters are, with .RE as for .FR, accented characters in the most used languages in France.

A decade after the introduction of the possibility to register names with accented characters, it is obvious that they represent an almost insignificant fraction of .REs (0.45%) and .FRs (0.72%). This proportion declined over a long period before stabilising. It is highly likely that these names are primarily defensive, and that the fraction of IDN names under the .RE actually used is symbolic, as for .FR.

Percentage of .RE domains with IDNs

Change in percentage of .RE registered or renewed for more than one year

Since 2015, it has been possible to register and renew .FR and .RE domain names for a duration of one to ten years. Here we will concentrate on the share of names in each stock whose expiry date was over 12 months away at 31 December of each year.

The higher ratio among .RE than .FR likely reflects the higher proportion of defensive .RE names. Indeed, the holders of these names have a vested interest in registering and renewing them for long periods if they correspond to flagship brands, while holders using their .RE as part of their professional activity paradoxically make the choice to renew every year, perhaps due to a lack of visibility with regard to their future.

Percentage of creations/renewals for more than one year for .FR and .RE domains

Another factor that can impact these ratios is the introduction of automated renewal systems by some major registrars, for the .FR. These systems limit the interest of registering and renewing on a multi-annual basis as they do not require payment of several annual instalments in advance. As such, the proportion of holders opting for the multi-annual mode tends to diminish year-on-year, and this trend is set to continue.

Distribution of .RE by creation year 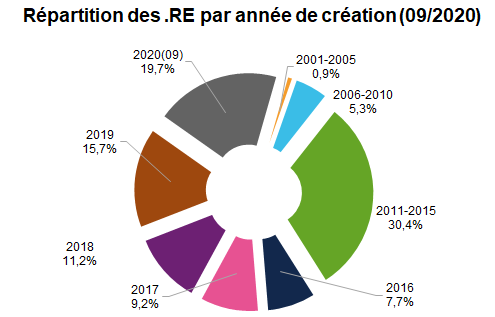 Distribution of .RE domain names by year of creation (Sept. 2020) 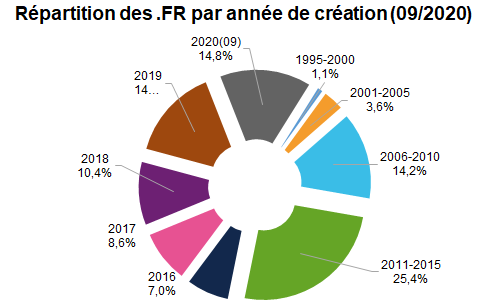 Distribution of .FR domain names by year of creation (Sept. 2020)

The renewal rate by age for .RE domain names underlines the fact that a name has more chance of being renewed if it already has been several times in the past. 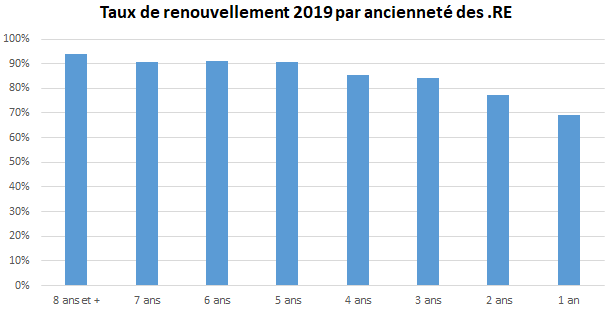 Thus in 2019, during their 1st renewal, only 70% of names were retained, with this proportion rising to 77% in the 2nd year and continuing to increase up to or beyond 90% as of the 5th year.

This phenomenon is important as it illustrates the interest, for a TLD, in having a base of names actually used and that are retained by their owners over a long period. B

y comparing this data with the graph showing the structure of names by age, we can see that .RE domain names pre-dating 2016 (renewed for the 5th time in 2020) represent 37% of the stock and have a 90% chance on average of being renewed, while ‘younger’ names, which account for 20% of the stock, have just a 70% chance of being renewed. This demonstrates the close connection between an ‘aggressive’ commercial policy leading to a high proportion of ‘young’ names, and the renewal rate which is automatically impacted by the high volatility of these names.

The concentration rate calculated here is the HHI (Herfindahl-Hirschman Index) taking into account the sum of the squares of the market shares of the leading 10 registrars. 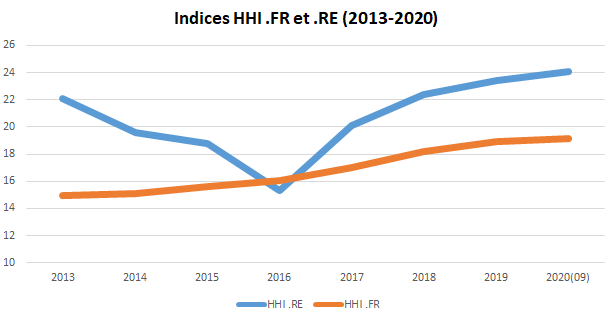 We can see that the .RE is far more concentrated than the .FR (that is to say it is more dependent on a relatively low number of registrars). According to the standards of the HHI, the .FR is not considered a ‘concentrated market’ whereas the .RE can be, given its index is above 20 and in constant progression since 2016-2017.

The .RE is clearly a dynamic TLD, ‘younger’ and more ‘volatile’ than the .FR. It seems primarily used for professional purposes to date, although it is becoming increasingly adopted by private individuals. To no great surprise, its holders are for the most part located in Réunion, and just over 70% are French.

The other indicators studied show differences in terms of details and magnitude with the .FR, but the trends are identical: for IDN and DNSSEC, as well as for the renewal rate based on the age of the names in the portfolio, the situations are similar.

The .RE appears to have huge potential, firstly as the moderate volume of its stock – 30,000 names, of which some 20,000 registered for professional purposes – suggests that there is still plenty of scope for development in the context of the acceleration of the digital transition. The growing adoption of the TLD by private individuals is also a guarantee of sustained development in the future.

.RE: the internet of Réunion

.RE: the internet of Réunion

Most French overseas communities have their own country-code ...

.fr: more than a simple TLD

Over 3.9 million .fr domain names are used every day by businesses, ...

.fr: more than a simple TLD